Who were Itchy & Scratchy Modeled After? 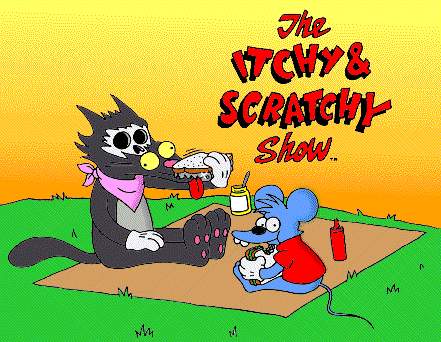 Itchy & Scratchy, like Krusty and The Happy Little Elves, have to be based on something.
I mean, it's obvious that Matt gets these ideas from somewhere !

Michael Rusignola thinks that perhaps the first guess most people have is that Itchy & Scratchy have their roots in Tom & Jerry. Cat and Mouse violence partners are pretty common, but T&J were the ones that made it mainstream. John Rastad agrees. He reminds us that both character sets can talk but rarely do and both are watched by little children (not read in strip or book form ). Of course, we can't forget the tons of merchandise created for their popularity and the fact that both have been in movies at the box office. Tom and Jerry started on the Bozo the Clown show (were in for 1 month before Paramount bought the rights to them), Itchy and Scratchy on Krusty's show...

Mark has suggested that perhaps "Itchy and Scratchy" was modelled after Squeak the Mouse, the xxx-rated comic released in book form, which had violent interplay between two very similar looking characters. This comic was imported from Italy, drawn by Andreotti, and originally banned by US Customs. Time frame? This comic came out 1985-86, just a year before "The Simpsons" appeared on The Tracey Ullman Show.

Doug Buell has a different theory. Doug told us that he feels that "Kit n'Kaboodle" could be the source for I&S. Kit n'Kaboodle was a comic strip in National Lampoon where Kit was constantly being messed up by Kaboodle the Mouse. Kaboodle would do things like tell Kit that his cat toy was in the aquarium; when Kit stuck his hand in, the Pirahnas ate it to the bone. Or Kaboodle would drop an anvil on Kit, and in a bloody sprawl on the ground, Kit would say something like "Blench, my spine!" Stuff like that. The only difference was that Kit had more oppurtunities to mess up on Kaboodle. He went on to tell us that way back when he was a National Lampoon reader, it was the funniest comic strip around, and he wondered how long it would take before it came to television in some fashion.

There are a few connecting factors between National Lampoon's comic and Itchy and Scratchy:

1) Matt Groening went to The Evergreen State College in Olympia, Wash. at a time when National Lampoon was the most poular magazine with stoners, partiers and the like.

3) Krusty may have had his origins in the feature called "The Evil Clown Comics" where the protagonist was a clown who's hair and face resembled Krusty, but was less succesfull and infinitely more unscrupulous. This would show that National Lampoon's would be a prominant influence...

Dank Rimski feels that Itchy and Scratchy are definately lifted from NatLamp's Kit and Kaboodle. He tells us he has an old Lampoon comic collection "Best of Lampoon Funnies" in which the 3 page episode appears. To him, there is no doubt that Matt lifted the idea directly from NatLamp, because he didn't even change the way the cat looks. This comic appeared in the late 70's or early 80's predating our Italian source by many years. He tells us that if we can locate the Lampoon version, you will have no doubts either. Matt Crawford agrees with this theory, reminding us not to forget that Conan O'Brien was Editor of the National Lampoon before joining the Simpson's crew.

Ed O'Rear has something else to add to this debate. He feels that another possible inspiration for I&S is "Herman and Katnip", a Harveytoon from the 40's or 50's. He saw one recently on Dutch TV and it was quite violent ( slicing knives, a stick or dynamite stick into the predictable place, etc. ) He had always assumed this was one of the cartoons satirized in "Kit and Kaboodle".

He also feels the names may have come from "The King Leonardo Show", a low-budget early 60's cartoon. King L's arch enemies were named Itchy Rat and Scratchy Brother ( they were a rat and a mangy lion, respectively ).

Back to The Krusty Show