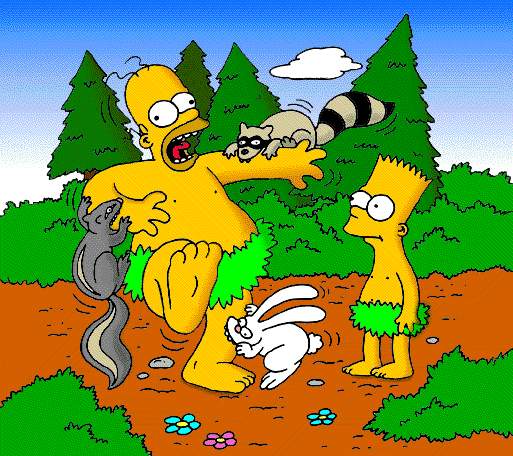 Homer: "step aside everyone. Sensitive love letters are my specialty."
Homer's letter:
'Dear Baby,
Welcome to DumpVille.
Population : YOU!!!'

The Truth About Mail

Bart: "Why the hose, Homer?
Homer: "What does it look like? I'll get our letter so wet the ink will run and no one will be able to read it."
Bart: "Yeah, but don't other people have mail in there?"
Homer: "So a few people won't get a few letters, boo hoo. You know the kind of letters people write!
Dear somebody you never heard of, how is so and so? Blah blah blah blah blah. Your's truly, Some Bozo.

Lisa: "Boy, mom sure will be happy you won 50 dollars."
Homer : "You'd think that wouldn't you? But you see, Lisa, your mother has this crazy idea that gambling is wrong. Even though they say it's OK in the bible."
Lisa: "Really? Where?"
Homer: "Uhh...somewhere in the back."

Homer: "Will you all stop worrying about that stupid comet? It's going to be destroyed. Didn't you hear what that guy in the building said?"
Lisa: "But dad, don't you think..."
Homer: "Lisa, the whole reason we have elected officials is so we don't have to think all the time. Just like that rain forest scare a few years back. Our officials saw there was a problem and they fixed it, didn't they?"
Lisa: "No, Dad, I don't think..."
Homer: "There's that word again!"

Homer: "When will you people learn? In America we stopped using corporal punishment and things have never been better. The streets are safe, old people strut confidently trough the darkest alleys and the weak and nerdy are admired for their computer programming abilities. So, like us, let your children run wild and free. Because, as the old saying goes, let your children run wild and free."

- Can you hold the wheel? I have to scratch myself in two places at the same time.
- Remember, son, the trick of advoiding jury duty is to say you're prejudiced against all races.
- Life is like a box of donuts...Hmmm, donuts...
- Just blame it on the guy who doesn't speak English. Ahh, Tibor, how many times you've saved my butt.
- Who ever thought a nuclear reactor could be so complicated?
- Stupid itchy church pants. One size fits all...my butt !

Homer: "All right, brain. I don't like you and you don't like me. So just get me trough this exam and I can go back killing you slowly with beer."
Homer's brain: "DEAL !"

Homer: "Kids, let me tell you about another so-called 'wicked' guy. He had long hair and some wild ideas and he didn't always do what other people thought was right. And that man's name was...

Marge, you know who I'm talking about. He used to drive that blue car."

Some Jerk: "That's a RIGHT triangle, you idiot."

Homer:" Ohhhhhhhhh, ya better not slouch, you better get fries, 'cuz if you don't I'm telling you why, Da-da-da's becoming....a clown.
DOOHH!!!"

-If they can send a man to the moon, why can't they make my shoes smell good?
-Are you really the oldest person in the world?
-Bart! What did you write on the back of my head?
-Operator. What's the number for 911?
-Lennie, can you get this sugar daddie off my back?

Back to my Home Page